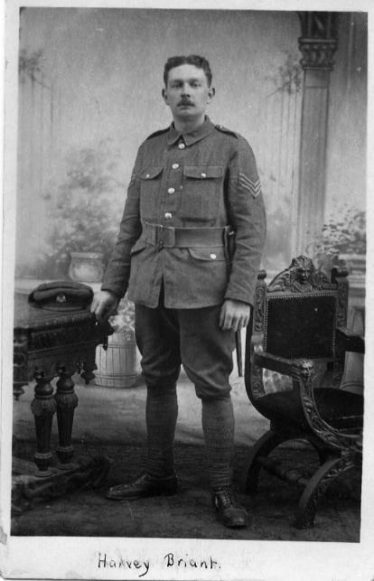 Harvey enlisted in the Bedfordshire Regiment in 1914 and served with the Expeditionary Force in France and Flanders until 1917.  He then returned to England and after a period of training at Trinity College, Oxford was gazetted 2nd Lieutenant with the Hampshire Regiment.  He served with the Egyptian Expeditionary Force in Egypt and Palestine from January 1918. In May of 1918 he proceeded to France where he died in action at Havrincourt, France on 12th September 1918.

Harvey was awarded the Military Cross for gallantry in action on 26 August 1918.  He was also awarded the 1915 Star, the Victory Medal and the British War Medal.

Harvey is buried in Havrincourt, France.  Harvey is commemorated on the Hermies Hill British Cemetery, France, on the St Mary’s Church Honours Roll and on the Ashwell Village War Memorial.

Harvey was the only son of Wilfred and Martha Jane (nee Eversden) Bryant of Vina Villa, and The Elms, Ashwell. On the 1911 census he is living with his grandfather, Joseph William Eversden.

Harvey was educated at the Merchant Taylors’ School in Ashwell. Before joining the army he was a farmer in Ashwell.

This decoration was awarded to Harvey Bryant for an act or acts of exemplary gallantry during active operations against the enemy.

The Military Cross (M.C.) is awarded for gallantry during active operations against the enemy.

Harvey Bryant,as an owner of the Military Cross, is entitled to use the letters M.C. after his name.

Citations for the M.C. were published in the London Gazette during the Great War. However if the M.C. was a King’s Birthday or New Year award, details were not published and in most cases will not be available.