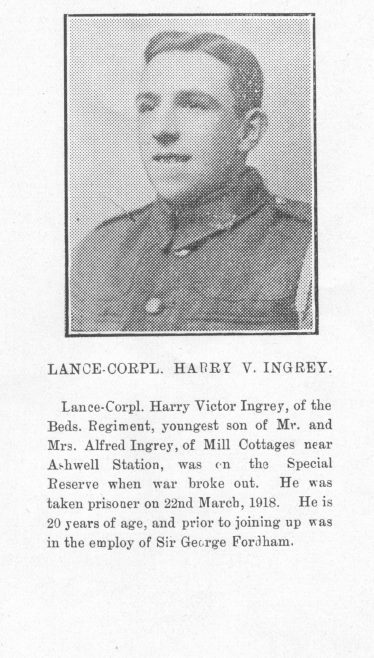 Harry enlisted in March 1915 with the Special Reserve Bedfordshire Regiment, Regimental Number 4/6931.   On 30th September 1915 Harry transferred to the 2nd Battalion Bedfordshire Regiment and embarked for the Western Front, France and Flanders. He fought in the Battles of the Somme and Ypres.  In 1918 the Battalion was involved in the battle of St Quentin and Harry was captured and taken prisoner on 22nd March 1918.

Harry survived the war and died at Histon, Cambridgeshire on 21.4.1972.

Harry was awarded the 1914/15 Star, the British War Medal, and the Victory Medal.

Harry was the fourth and youngest son of Alfred and Hannah (nee Chamberlain) Ingrey, born on 23.10.1897 at Bassingbourn, Cambridgeshire. He was a pupil at the Merchant Taylors School in Ashwell, Hertfordshire.

Harry married Miriam Alice Street in the Biggleswade District, Bedfordshire in the 3rd quarter 1920. They had a daughter, Eileen Alice born in September 1920.

In 1923 Harry and Miriam applied for immigration to Canada. Harry set sail to Quebec on 10.8.1923 stating that he was going to be a harvester in Winnipeg. It appears he went no further than the Quebec area as Miriam and Eileen followed him on  6.6.1924 stating they were going to Asbestos, Quebec. A son, Eric Harry, was born to them in 1933 in Asbestos.

Both Eileen and Eric married and settled in Asbestos, Quebec . Harry and Miriam settled in Richmond-Wolfe, Quebec where Harry was a foreman. It appears that Miriam died sometime between 1953 and 1960.

Harry returned to England and married Nora Rees (nee Bedford) in the Biggleswade District in the 1st quarter 1962.

Harry’s brothers, Alfred, Albert and William all served in the War, all were wounded, but all survived.