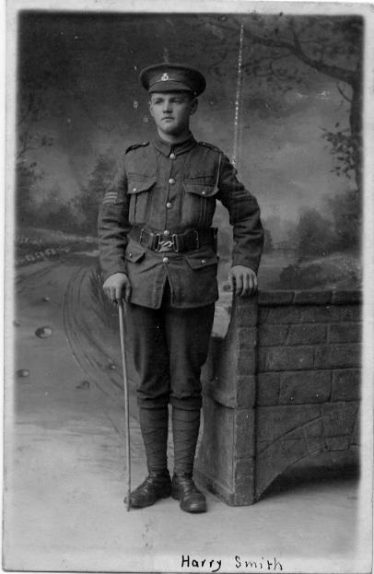 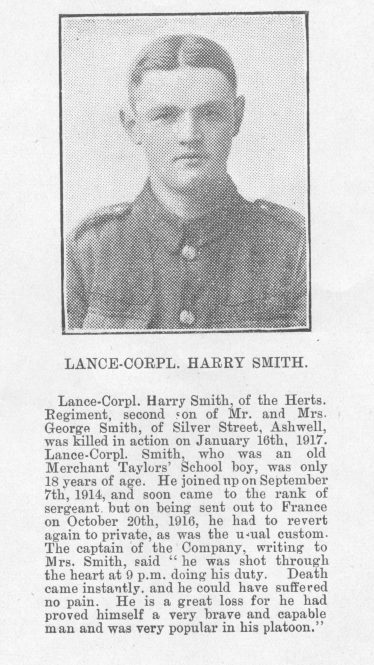 Lance-Corporal Harry Smith served with the 1st Battalion of the Hertfordshire Regiment, Regimental number 2900 in the Western European Theatre of War, France and Flanders.  He enlisted at Hertford on 7th September 1914 and soon attained the rank of Sergeant while training in England. He was sent to France on 20th October 1916 with the Expeditionary Force, reverting back to Private as was the custom.  He was promoted to Lance-Corporal by the time of his death west of Ypres where he was killed in action on 17th January 1917.

His Captain Thomas Gibbons wrote “He was a great loss, for he had proved himself a very brave and capable man, and he was very popular in his platoon”. In a letter his CO wrote to Harry’s parents he claimed that “Harry was shot through the heart at 9pm on 16th January.  Death came instantly and he could have suffered no pain.”

Harry was awarded the Victory Medal and the British War Medal.

He is buried in Vlamertinghe Military Cemetery, Ypres, Belgium, and commemorated on the St Mary’s Church Ashwell Roll of Honour and the Ashwell War Memorial.

Harry was the second son of George and Lilla (nee Worboys) Smith of Ashwell.  He was a pupil of the Merchant Taylors School in Ashwell and before enlisting was a milkman.

Harry’s brother Herbert was killed in action in France on 21st March 1918.