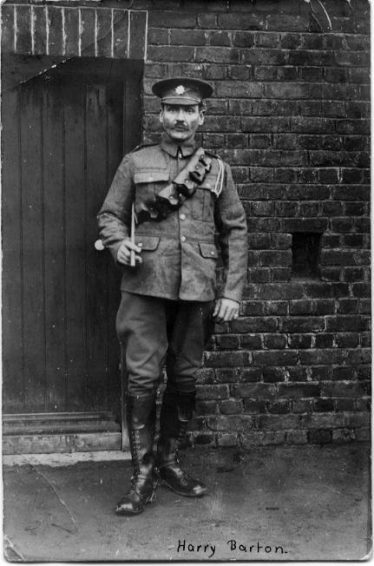 Harry enlisted at Bedford on 31st August 1914 at the age of 33years 6 months with the Bedfordshire Regiment, Regimental Number 14103. He served only 62 days and was discharged on 31st October 1914 being ‘not likely to become an efficient soldier due to defective vision’. Later, as the need for soldiers became more urgent Harry was enlisted with 23rd Squadron Army Service Corps Remounts, Regimental Number R4/095999. He transferred to the Labour Corps, Regimental Number 703944.  It is not known in which Theatre of War he served but a few Remount squadrons did serve on the Western Front.  It is not known when Harry died.

Harry was awarded the British War Medal and the Victory Medal.

Harry was the eldest child of Martha Barton of Ashwell. He was a pupil at the Merchant Taylors School in Ashwell.

Before enlisting he was a farm labourer.

It is not known if Harry married or had children, nor when he died.