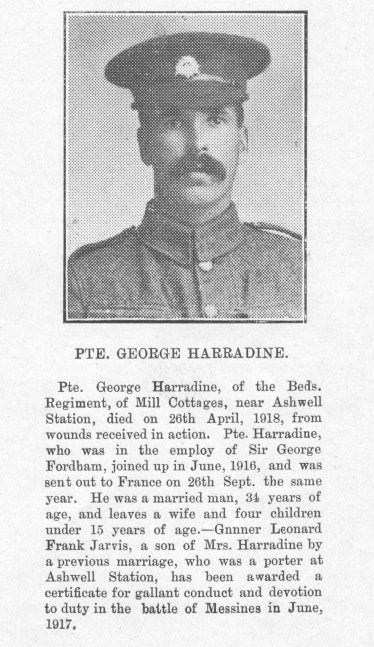 George was a private in the Bedfordshire Regiment ‘C’ Company 7th Battalion 54th Brigade 18th Division, regimental number 29765. He enlisted at Bedford in June 1916 and died of wounds on 26th March 1918. He fought in the Western European Theatre of War, France and Flanders.

He is commemorated at Crouy British Cemetery, Crouy-sur-Somme, France and on the Odsey War Memorial.

George was awarded the Victory Medal and the British War Medal.

George was born in Steeple Morden Cambridgeshire at the time of enlisting lived at Mill Cottages, Odsey with his wife Rosetta (nee Flack) (widow of Frank Jarvis) with his two step-children and 3 children.

Rosetta Flack was born in Chrishall, Essex and was the widow of Frank Jarvis when she married George in 1907.

George enlisted in June 1916 and was posted to France in September of that year. He died of his wounds after receiving a serious gunshot to his shoulder, believed to be in the area of Cachy.

Before he enlisted George was a farm labourer.