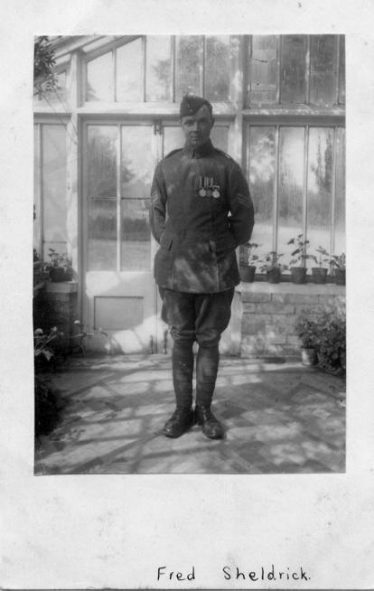 Frederick enlisted on 15th February 1916 with the Royal Flying Corps, Regimental Number 23323.  He embarked to the Western Front, France and Flanders on 22 May 1916 with Squadron 11 and with a few visits to his home base of RAF Docking, Norfolk, saw active service on the Western Front until 4th December 1919.  On 1st March 1917 he was promoted to Corporal and on 1st March 1918 he was promoted to Sergeant.  On 1st November 1918 he transferred to the Royal Air Force, Squadron 23, as Sergeant, he was classed as an aero rigger. He served with the 23rd, 84th and 20th Squadrons.  He survived the War and died in December 1972 at Ashwell, Hertfordshire.

Fredrick was awarded the 1915 Star, the British War Medal and the Victory Medal.

Frederick was the third son of John and Martha (nee Scoot) Sheldrick, born at Thriplow, Cambridgeshire on 12th October 1886. He was a pupil at the Merchant Taylor School in Ashwell, Hertfordshire.  Before enlisting Frederick was a gardener and chauffer.

Frederick married Ruth Magness at Dersingham, Norfolk in the 4th quarter 1918. They had two daughters, both born in Dersingham, Jean Margaret born 1919 and Sybil Dorothy born 1921. e was ap

After living in Snettisham, Norfolk for a number of years the family moved to Ashwell, Hertfordshire where Frederick died in December 1972.