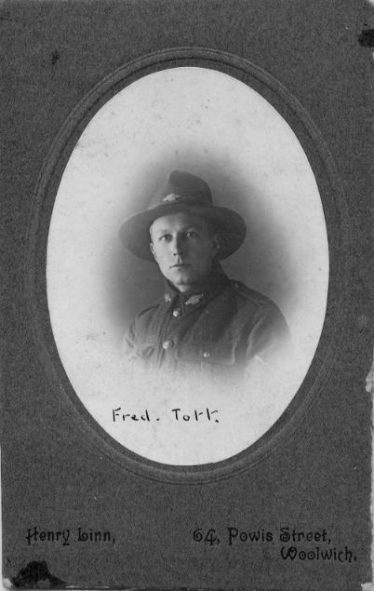 Frederick enlisted with the Wellington Regiment of the New Zealand Expeditionary Force on 3rd February 1915. He later transferred to the Taranaki Rifles. He saw active service in Palestine, Gallipoli, and Passchendaele.  He had risen to the rank of 2nd Lieutenant by February 1919.  He was demobbed in July 1919.

Frederick received the Military Medal and the Belgian Croix de Guerre for acts of gallantry at Passchendaele in February 1918. He was also awarded the British War Medal and the Victory Medal.

Frederick survived the War and died in England in 1967.

Frederick was born in Ashwell, Hertfordshire in 1886, the fifth son of James and Mary Anne Alice (nee Austin). At age 14 he was a butcher’s lad in Ashwell.

Frederick emigrated to Wellington, New Zealand in 1910 where he worked as a butcher.

Frederick returned to Ashwell, Hertfordshire at the end of 1919 after being demobbed from War service. He settled on Church Farm, Holwell, Bedfordshire in about 1923. His brother Albert William joined him on the farm in about 1929. Frederick married May Baines in the Hitchin District in the first quarter 1932. It appears they had no children.  He died in March 1967.

Frederick’s brother Albert enlisted on 2nd May 1917 and saw active service on the Western Front.

His brother Wilfred emigrated to Canada in 1913 and married Ethel Langdon at Wellington Co, Ontario in 1915.