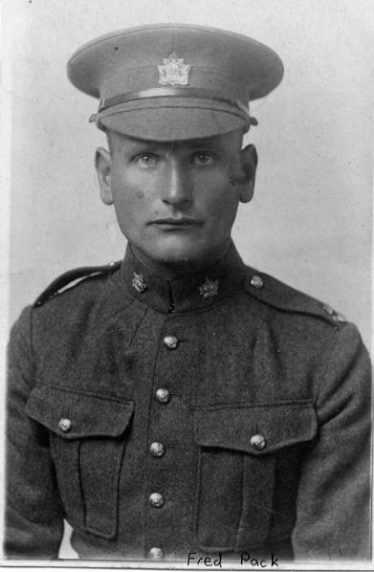 Fred enlisted with the Canadian Expeditionary Forces on 24th October 1914, Regimental Number 53499, at Woodstock, Ontario Canada.  The Canadian forces fought on the Western Front, France and Flanders during the War in the Battle of Ypres, and Passchendaele. Fred embarked for Boulogne on 15th September 1915. He rapidly gained promotion and by June 1917 was Company Quarter Master Sergeant. He was awarded the Meritorious Service Medal in June 1918.  In September 1917 he was dispatched to the Witley Camp, Surrey for an officers training course.  He survived the War and was discharged on 21st February 1919, but it is not known when he died.

Fred was awarded the British War Medal, the Victory Medal and the Meritorious Service Medal.

Fred was the second son of William Waldock Pack and Annie Maria (nee Berry) Pack, born in Ashwell on 2nd April 1887. He was a pupil at the Merchant Taylors School in Ashwell.

Fred emigrated to Canada in about 1910 and settled in Ontario.  He married Annie Beattie on 7th July 1921.  Annie emigrated to Canada arriving in May 1921.  She was a nurse and her arrival into Canada form shows that she was joining her fiancé, Frederick George Pack, in Burgoyne, Bruce County, Ontario. It is not known if they had children.

It is not known when Fred died.

Fred’s brothers Lawrence and Stanley both served in the War and survived.