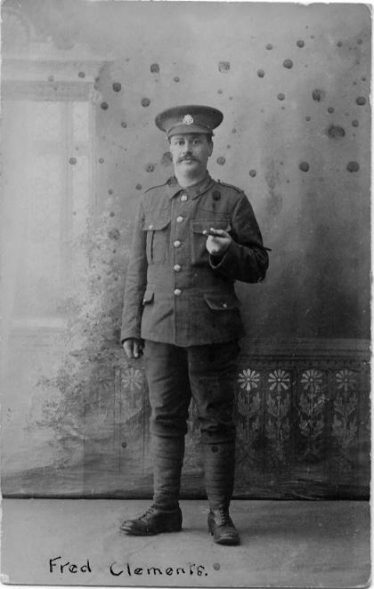 Frederick enlisted on 8th September 1914 with the (Queen’s) Royal West Surrey,  2/4th Territorial Force, Regimental Number T/4144, which became part of the Home Counties Division. When Frederick was mobilised for war he was transferred to the 160th Brigade of the 53rd Division, Regimental Number 202006, and landed at Gallipoli on 9th August 1915. Due to extremely heavy casualties from combat, disease and harsh weather the Division was evacuated.  They then went on to fight in the Palestine Campaign during 1916 and 1917. In June of 1918 they were deployed to the Western Front, France and Belgium and ended the war there near Courtrai in Belgium.

Frederick was awarded the British War Medal, the Victory Medal and the Silver War Badge.

Frederick survived the war and died on 12th October 1948.

Frederick was born in Ashwell, Hertfordshire c1887 the only son of Mark and Maryann (nee Oyston) Clements. He was a pupil at the Merchant Taylors School in Ashwell.  The 1911 census shows him as a farm labourer.

Frederick married Mary Sears (nee Goss) on 18th August 1928. It is not known if they had children.  Mary died in December 1938.

Frederick then married Joan Constance Doreen Skirman in the 2nd quarter of 1942. They had three children, Frederick John, Colin Mark and Eileen Joan.