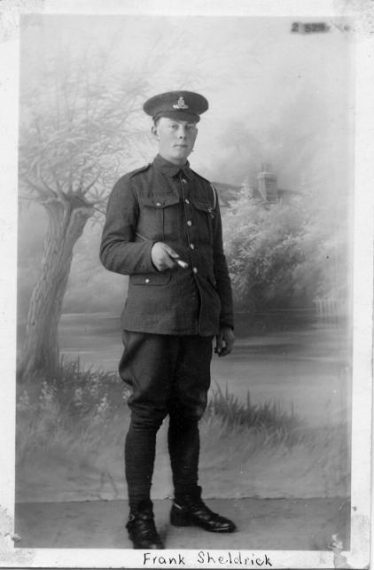 Frank enlisted at Hitchin on 17th October 1916.  He served with the Machine Gun Corps, Regimental Number 85554. On 30th December 1916 his parents wrote to the authorities protesting against their son being sent to the Front before his 19th birthday but unfortunately their objections were ignored and Frank was sent to the Western Front, France and Flanders.  In April he received gunshot wounds to both legs and on 19th January 1919 he was discharged as no longer fit for military service.

Frank survived the war and died in Ashwell on 30th January 1980.

Frank was awarded the British War Medal, the Victory Medal and the Silver War Badge.

Frank was the sixth son of John and Martha (nee Scoot) Sheldrick, born in Ashwell, Hertfordshire on 5th May 1898.  He was a pupil at the Merchant Taylor School in Ashwell. Frank was no angel and had many confrontations with the Law. Before enlisting he was a builder’s labourer.

Frank married Miriam Holben in London in the 3rd quarter 1926. They had one daughter, Mary Eleanor, born in Ashwell on 31st July 1930.