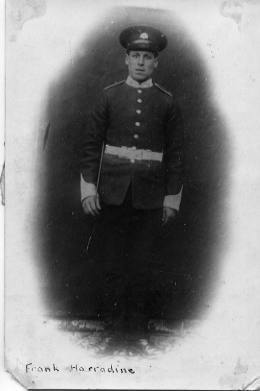 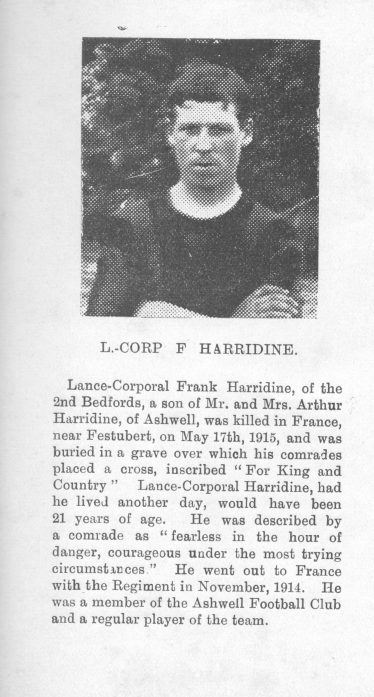 Frank enlisted in Ashwell on 30th November 1912 and was a Lance Corporal in the 2nd Battalion of the Bedfordshire Regiment. He fought in the Western European Theatre of War, France and Flanders. He was killed in action near Festubert, France during the 2nd Battle of Ypres on 17th May 1915 and was buried in a grave over which his comrades placed a cross inscribed “For King and Country”.

Frank is commemorated in the Guards Cemetery, Windy Corner, Cuichy, France, on the St Mary’s Church Ashwell Roll of Honour and the Ashwell Village War Memorial.

Frank was awarded the 1914/15 Star Medal, the Victory Medal and the British War Medal.

Frank was born on 1st July 1894, second son of Arthur Butler Harradine and Emma (nee Goodchild) Harradine of Ashwell. Frank was a pupil of the Merchant Taylors School in Ashwell and before enlisting was a farm labourer.

Frank was a member of the Ashwell Football Club and regularly played for the team.

March 1915 Events from the Royston Crow

Mr Chote, the headmaster, had news from Private Herbert Crow, 19, who, while serving in H.Q. at the Front, had seen old boys Sidney Chapman and Frank Harradine.

May 1915 Events from the Royston Crow

The sister of Lance-Corporal Frank Harradine received a letter saying he was missing.