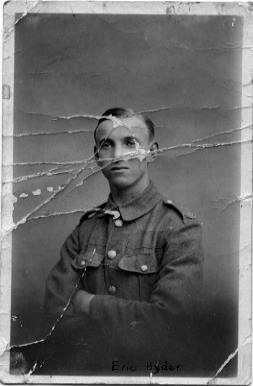 Eric enlisted on 20th October 1914 with the 1st Hertfordshire Regiment, Regimental Number 266038.  He transferred to the Leicestershire Regiment as a signaller, Regimental Number 235583, firstly with the 8th Battalion and then the 7th Battalion.  He was mobilised in July 1915 for the Western Front, France and Flanders where he saw active service in various Battles of the Somme and the German retreat to the Hindenburg Line.

Eric survived the war and died in the 2nd quarter 1979.

Eric was the fourth son of Thomas Silver Hyder and Clarissa (nee Bonfield) Hyder, born Hill on 28th May 1898 at Flint House, Lime Kiln Hill, Ashwell, Hertfordshire.  He was a pupil at the Merchant Taylors School in Ashwell.

In 1921 Eric took assisted passage immigration to Canada where he hoped to farm.  He returned to England, having qualified as a mechanic, in December 1927.

Eric lived in Luton, Bedfordshire from 1937 until his death in 2nd quarter 1979.