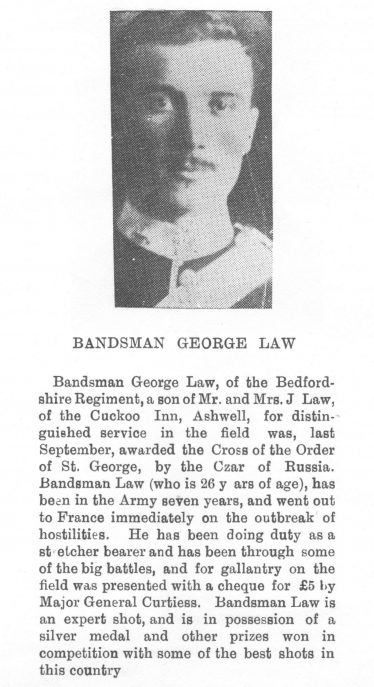 George enlisted with the 1st Bedfordshire Regiment in 1908, Regimental Number 9448. His battalion was stationed at Aldershot Barracks at the outbreak of War and was one of the first to land in France. He saw active service on the Western Front, France and Flanders where in 1915, for gallantry and distinguished service, was awarded the Cross of the Order of St George, presented by the Czar of Russia. He was also presented with a cheque for £5 for ‘gallant conduct in the field’, which he sent home to his parents. In 1916 George suffered shell shock but after a period of recovery he returned to Flanders and took part in the Battles of the Somme.

George survived the War but it not known when he died.

He was awarded the 1914/15 Star, the British War Medal, the Victory Medal and the Cross of St George.

George was the second son of William John and Rose (nee Elliott) Law, born at Litlington, Cambridgeshire in the first quarter 1891. He was a pupil of the Merchant Taylor School in Ashwell, Hertfordshire.  George was an expert shot and won many trophies in competitions around England.

It is not known if George married or had children.

It is not known when George died.