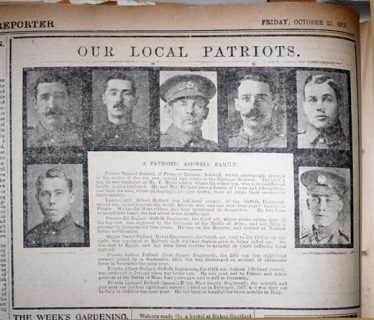 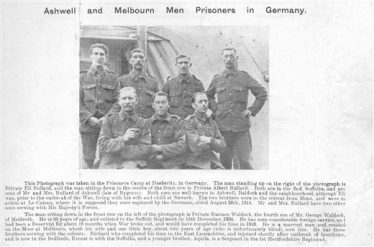 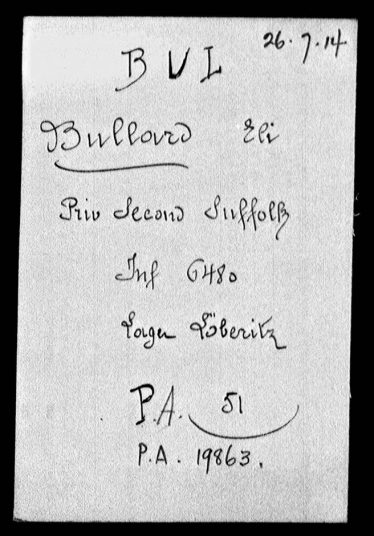 Eli was a Reservist when he enlisted with the Suffolk Regiment on 4 August 1914 and joined the 2nd Battalion.  In August 1914 the 2nd Battalion was mobilised for war and landed at Havre. They engaged in action at the Battle of Mons and subsequent retreat, and the Battle of Le Cateau where the Battalion suffered heavy casualties and there is now a monument to the 2nd Suffolk Regiment. This is where Albert was captured on 25th May 1914 by the Germans and was sent to Doeberitz as a prisoner of war.  He remained at the Doebritz camp until his release in 1918.

Albert was awarded the 1914 Star with clasp and roses, the Victory Medal, the British War Medal.

Having survived the war Eli returned to Newark and died at Andover in June 1971.

Eli was the third son of Samuel and Ruth (nee Hayden) Bullard, born on 8th January 1886 at Thriplow.  He was a pupil at the Merchant Taylors School in Ashwell, Hertfordshire and before enlisting resided in Newark. The 1911 census shows him as a railway mineral porter residing in Netherfield, Nottingham.

Eli married Laura Annie Holder in 1907 at Chesterton, Cambridgeshire.  They had one son, Herbert George, born in Netherfield, Nottingham on 6th March 1909.

After the War Eli returned to Newark and died at Andover in June 1971.

Five of Eli’s brothers served in the War. All survived but Albert was also captured by the Germans at Cateau in May 1914 and spent the War in Doebritz Prisoner of War Camp. His brother Frederick, an agricultural labourer, was unfit for war and remained on the farm. His father, Samuel, served with the Hertfordshire Territorial Force and was billeted at home.

Private Eli Bullard (Suffolk Regiment), the third son, whose photo comes next in the top row, was captured by the Germans at the Battle of Mons, and has been a prisoner in Germany for four years.  He was on the Reserve, and resided at Newark before mobilisation.