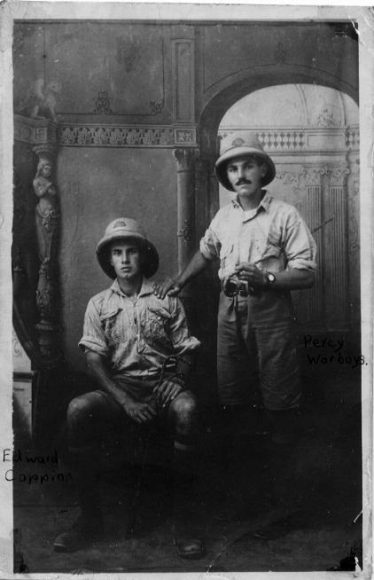 Edward enlisted with the Australian army at Liverpool, New South Wales, on 18th February 1915. Edward embarked for England and was immediately sent to the front in France. He served with C Company, 18th Battalion, Service Number 840, in the Balkans Theatre of War, Gallipoli where he remained until the evacuation in December 1915. He was then sent to France and was promoted to Corporal on 2nd February 1916. He was wounded in action on 28th July 1916 and returned to England.

Edward was awarded the 14/15 Star, the Victory Medal, the British War Medal and the Anzac Medal.

Edward was born on 13th August 1890 in Long Stratton, Norfolk, the elder son of Harry and Angelina Louisa (nee Bowen).  The 1901 and 1911 census records show Edward living with his family in Ashwell.  It is presumed he was a pupil at the Merchant Taylor School in Ashwell.

Before enlisting Edward was a carpenter, having served a 4 year apprenticeship at ‘Redhouse’, Stotfold, Hertfordshire.

On 7th September 1912 Edward emigrated to Australia with Percy Worboys from Ashwell. In 1915 he enlisted as a naturalised Australian.

On returning to Australia after the War Edward married Dorothy E Holmes on 2nd May 1919.  They had one son, Laurence Henry, born on 1st June 1920 who became a very well-known and respected member of the Canberra community.

Pte EJ Copping, Australian Infantry, wounded in left hand, at hospital in Epsom. Here he met again Pte P Warboys whom he emigrated with some years ago, both served at Gallipoli where Worboys was badly wounded.