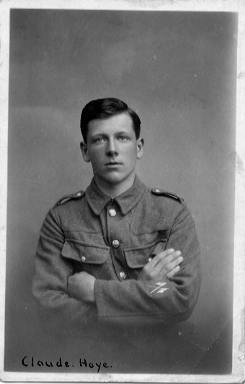 Claude survived the war and was awarded the British War Medal and the Victory Medal.

Claude was the eldest son of Albert John and Nellie Augusta (nee Radford) Hoye, born in Ashwell, Hertfordshire on 16th July 1898.  He was a pupil at the Merchant Taylors School in Ashwell. Although his family was living in Ashwell in 1911, there were seven children so Claude lived with his grandfather.

Claude married Ruby Whitelock in Edmonton, Middlesex in the 4th quarter of 1919. They had one son, Douglas Claude, born on 7th July 1920 in Enfield, Middlesex.

Claude lived the rest of his life in the London area.

There is a note in his military records of 1921 that suggest he was with the Metropolitan Police.