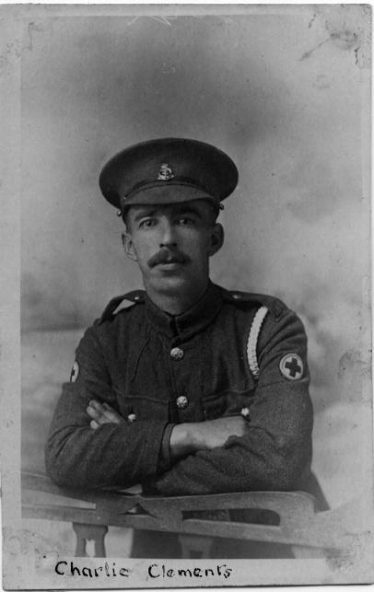 The attached photograph is of a man in Royal Army Medical Corps uniform. There is no evidence that Charlie was in the Medical Corps. The Absent Voters list of 1918 shows Charlie with the Hampshire Regiment and all other references corroborate this.

Charles enlisted in June 1915.  He served 1/6th Royal Hampshire (Duke of Connaught’s Own) Regiment (Regimental Number 205393) which in 1917 was transferred to the 52nd Brigade of the 17th Indian Division and Charles spent a year in India. In October 1918 the regiment moved to Mesopotamia and finished the War in Fatha, north of Tikrit. He survived the War and died on 10 October 1953 at Chertsey, Surrey.

Charles awarded the British War Medal and the Victory Medal.

Charles William was the second son of Herbert and Annie Maria (nee Reynolds) born in the 2nd quarter of 1890 in Ashwell, Hertfordshire, christened on 1 June 1890, He was a pupil at the Merchant Taylors School in Ashwell. The 1911 census shows him as a farm labourer.

Charles had two brothers who served in WWI, Herbert George and Harold Christopher, both survived.