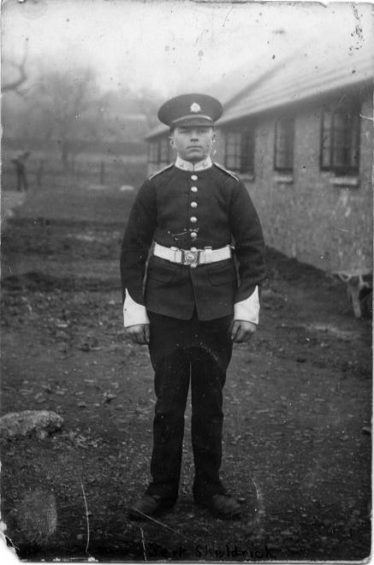 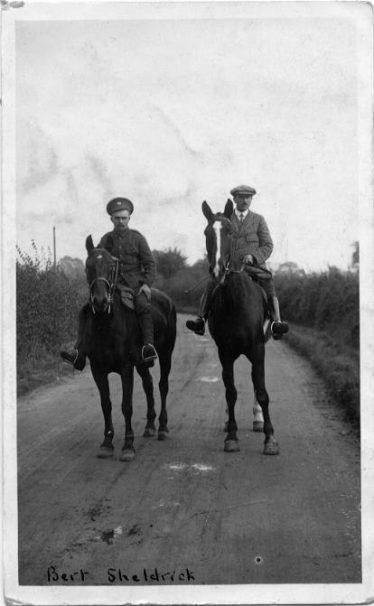 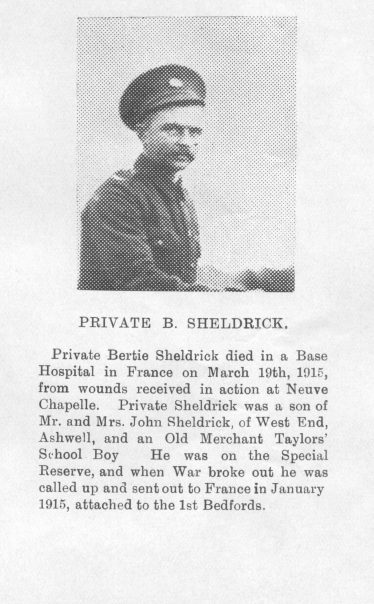 Bertie was with the Special Reserve and when war broke out he enlisted at Hitchin on 6th August 1915. He was a private with the Bedfordshire Regiment 1st Battalion, Regimental number 4/6266 and served in the Western European Theatre of War, France and Flanders. He died in a Base Hospital on 19th March 1915 of gunshot wounds received in action at Neuve Chapelle.

Bertie was awarded the 1914/15 Star, the Victory Medal and the British War Medal.

He is buried at the Ste Marie Cemetery, Le Havre France, and commemorated on the St Mary’s Church Ashwell Roll of Honour and the Ashwell War Memorial.

Bertie was born in Thriplow, Cambridgeshire the fourth son of John and Martha (nee Scoot) Sheldrick. He was a pupil of the Merchant Taylors School in Ashwell. The 1911 census shows Bertie, a general labourer, boarding at 32 Talbot Street, Hertford. Before enlisting he had been with the Army Reservists.

Bertie’s brother John was killed in action in 1917 whilst serving with the South Wales Borderers.

There was sad news from the ‘Boys at the Front’.  At least three were involved in the Battle of Neuve Chapelle. Private ‘Bert’ Sheldrick, of the Beds Regiment, died from his wounds at the Base Hospital in France. We have two pictures in the museum labelled Bert Sheldrick which are reproduced here.