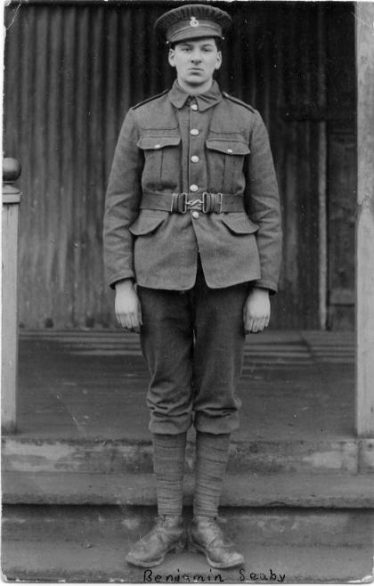 Benjamin enlisted in October 1914 with the Hertfordshire Regiment, Regimental Number 4033. He transferred to the Royal Sussex Regiment, Regimental Number G/15560, serving first with the 11th Battalion with whom he was mobilized to France in March 1915 and fought various battles on the Western Front.  He then transferred to the 12th Battalion and received a gunshot wound to his left forearm.  After recovering he joined the 16th Battalion, ending the War in Belgium. Benjamin survived the War and died in 1966.

Benjamin was the eldest son of Alfred and Hannah (nee Barton) born on 2nd July 1893 at Ashwell, Hertfordshire. He was a pupil at the Merchant Taylors School in Ashwell. Before enlisting he worked at a brewery.