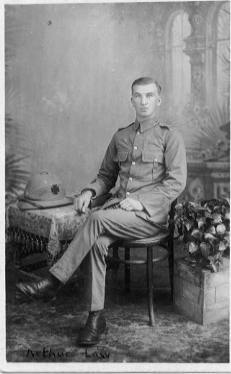 Arthur enlisted with the 1st (Duke of Edinburgh’s) Wiltshire Regiment, Regimental Number 26247, on 16th march 1916.   He saw active service on the Western Front, France and Flanders.  He transferred to the 5th Battalion and in 1917 whilst engaged in the Battle of Kut al Amara in the Mesopotamian Theatre of War Arthur was declared killed in action.  He was later found to be alive and survived the War being discharged from service in 1920.

Arthur was the second son of James Law and Elizabeth Ann (nee Harradine) born in Newnham, Hertfordshire in the 3rd quarter 1892.  Arthur was a pupil at the Merchant Taylors School in Ashwell.  The 1911 census shows him as a footman.

In August 1911 Arthur was severely burned rescuing his father from a haystack fire and removing James’s clothes.

It is not known if Arthur married or had children.

It is not known when Arthur died.

Arthur’s brother Bruce was killed in action on the Western Front in 1918.