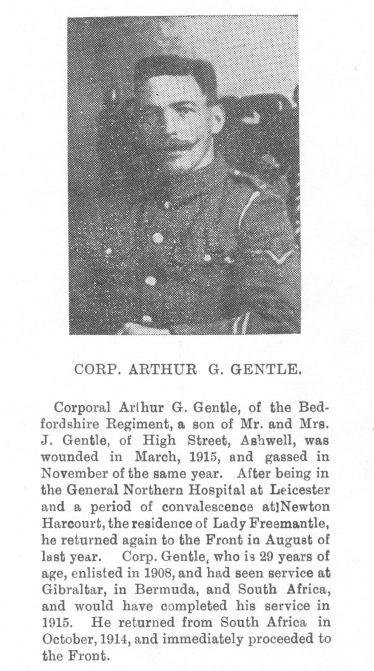 Arthur enlisted at Hitchin on 16th January 1908 and was a corporal in the Bedfordshire Regiment, 2nd Battalion, Regimental number 9262.

He had seen service at Gibraltar, Bermuda and South Africa and would have completed his service in 1915. He returned from South Africa in October 1914 and was immediately sent to the Front in France.  He was wounded in March 1915 and gassed in November of the same year. After being in the General Northern Hospital at Leicester and spending a period of convalescence at Newton Harcourt, the residence of Lady Freemantle, he returned again to the Front in August of 1915. He was severely wounded in the Battle of Neuve Chapelle and died of wounds on 16th July 1916.

Arthur was awarded the Victory Medal and the British War Medal.

Arthur was the fourth son of James and Emily Gentle of High Street, Ashwell.

He was a pupil at the Merchant Taylors School in Ashwell.  Before enlisting he was an agricultural labourer.