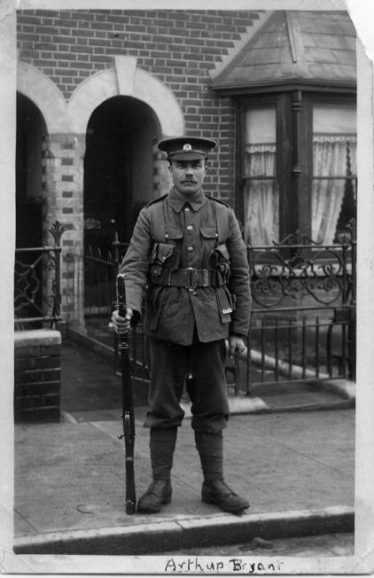 Arthur enlisted with the 1/5th Battalion (Territorial Force), Bedfordshire Regiment in September 1915, Regimental Number 5712. In 1917 his battalion fought in the Battles of Gaza and the Battle of Jaffa. During the War Arthur’s Regimental Number changed to 201111. The 1/5th Battalion engaged in various battles in the Sinai and Palestine Campaign, ending the war in Beirut.  Arthur survived the War and died at Royston in 1968.

He is commemorated on the Mary’s Church Ashwell Roll of Honour.

Arthur was born at the end of 1880 in Ashwell, Hertfordshire, the eldest of four sons of Benjamin and Esther (nee Huffer) Bryant, He was a pupil at the Merchant Taylor School in Ashwell.

Arthur married Neina Maria Clements in the 1st quarter of 1906 in Ashwell. They had two children, Frederick born in 1907 and Percy born in 1909.

The 1911 census shows Arthur as a coal porter.