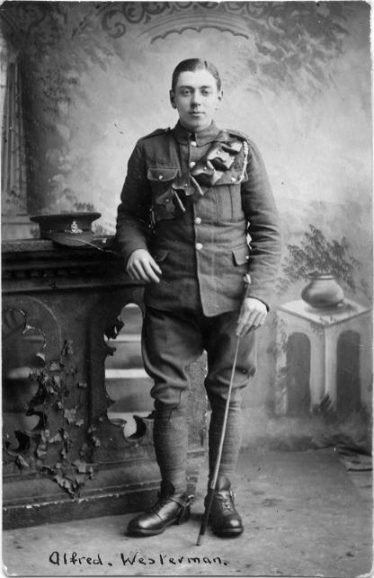 Alfred enlisted with the Royal Field Artillery Territorial Force, Regimental Number T895730, on 30th October 1915 at Hertford, Hertfordshire.  He was posted to the 6C Reserve Brigade, Regimental Number 895730, on 26th February 1917 he was transferred to the 52nd Battery and on 25th May 1917 he was embarked to the Western Front, France and Flanders as a driver with the Royal Field Artillery. Alfred was demobbed on 31st August 1919.

Alfred survived the War and died at Shortstown, Bedfordshire on 5th March 1950.

Alfred was awarded the British War Medal and the Victory Medal.

Alfred was born at Ashwell, Hertfordshire on 11th December 1896, the second son of Arthur and Georgina (nee Gray) Westerman. He was a pupil at the Merchant Taylors School in Ashwell but left at the end of 1910 having attained exemption age. He then went to work as a bottler at the local brewery. His parents had been proprietors of various pubs including the Fox in Ashwell, and the Saracen’s Head in Bedford.

Alfred did not marry and lived with his mother and sister in Bedford, Bedfordshire.  He left half his estate to his sister Alice (Soames).

Alfred’s brother Frank emigrated to Canada in 1910.  It is not known if he served in the War.