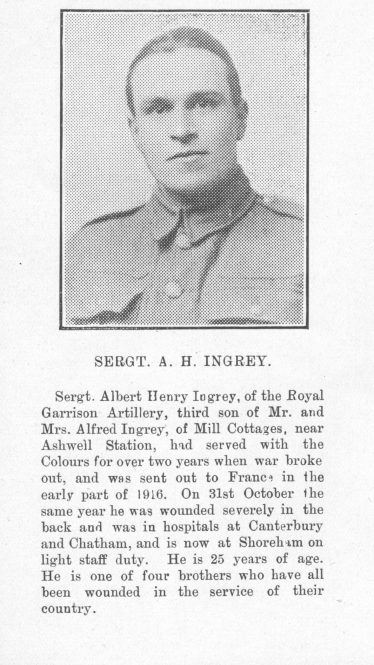 Albert enlisted on 30th October 1912 with the Royal Garrison Artillery, Regimental Number 37995. In March 1916 he was drafted to the Western Front, France and Flanders.  He took part in severe fighting on the Somme and at Passchendaele. On 31st October of that year he was severely wounded in the back and was evacuated back to England where he was in hospitals at Canterbury and Chatham.  After recovering he returned to his regiment and took up light staff duty at Shoreham.  Albert was discharged on 5th April 1919 as no longer fit for military service.

Albert survived the War and died at Baldock, Hertfordshire on 28th May 1982.

Albert was awarded the 1914/15 Star, the British War Medal, the Victory Medal and the Silver War Badge.

Albert was the third son of Alfred and Hannah (nee Chamberlain) Ingrey, born at Bassingbourn, Cambridgeshire on 26th September 1893.  He was a pupil at the Merchant Taylors School in Ashwell, Hertfordshire.  Before enlisting Albert was a farm labourer.

Albert died at Baldock, Hertfordshire on 28th May 1982.

Alberts’s brothers, Alfred, William and Harry all served in the War, all were wounded, but all survived.