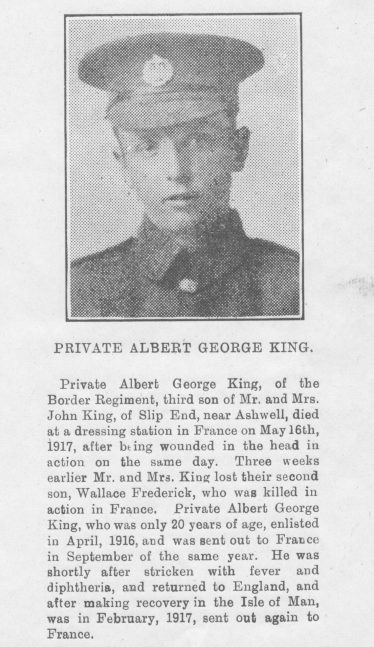 Albert enlisted at Hitchin with the Essex Regiment in April 1917, Regimental number 6297.   He was sent to France in September 1917 but was shortly after stricken with fever and diphtheria and returned to England.

After recovering in the Isle of Man was again sent with Borders Regiment 1st Battalion Regimental number 27593 to France in February 1917. He fought in the Western European Theatre of War, France and Flanders.  He died of wounds on 16th May 1917 at a dressing station after being wounded in the head in action on the same day.

Albert was awarded the Victory Medal and the British War Medal.

He is buried at Duisans British Cemetery, Etrun, France and commemorated on the Odsey War Memorial and the Sandon War Memorial.

Albert, born at Slip End, Sandon, was the third son of John and Sophia (nee Gray) King of the Slip End, Ashwell, Hertfordshire.  Before enlisting he was a farm labourer.

Three weeks before Albert died his brother Wallace Frederick was killed in action in France serving with the Bedfordshire Regiment.