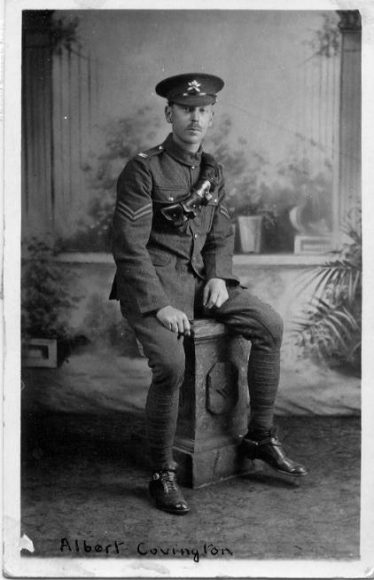 Albert enlisted with the King’s Royal Rifle Corps. Regimental Number R/10077, in February 1915. During the War he transferred to the Machine Gun Corps, Regimental Number 14028 and was promoted to Sergeant. He was in the 128th Company which saw active service in Mesopotamia, the Asian Theatre of War.

Albert survived the War. He died on 8th October 1967 at The Cottage, Ashwell, Hertfordshire.

He was awarded the British Medal and the Victory Medal.  He is commemorated on the St Mary’s Church Ashwell Roll of Honour.

Albert was born in Ashwell, Hertfordshire in the 1st quarter 1891, the 2nd son of George Goodchild and Emily (nee Waldock) Covington. He was a pupil at the Merchant Taylors School in Ashwell.  The 1911 census shows him as a grocer’s assistant.