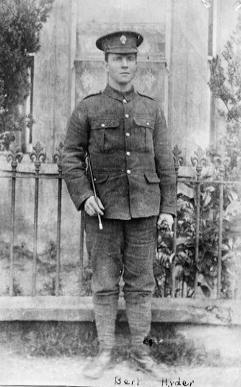 Albert had been living in Canada and returned to England in November 1913.  He enlisted on 29th August 1914 in the Foreign Service Regiment, regimental number 2381, the West Canadian Rough Riders (Manitoba).  He was posted to France where he was attached to the 7th Battalion Royal Fusiliers (City of London Regiment), regimental number 333.  He was wounded in action and died of his wounds at a Casualty Clearing Station on 23 February 1917.  He was promoted to the rank of Sergeant the day before he died.

He fought in the Western European Theatre of War, France and Flanders.

Albert was awarded the Victory Medal and the British War Medal.

Albert was born on 21st June 1885, the third son of Mr Thomas Silver Hyder and Mrs Cressida (nee Bonfield) Hyder of Kingsland Hill (Lime Kiln Hill), Ashwell. He was a pupil of the Merchant Taylors School in Ashwell.

Albert was a painter before he went to Canada in about 1907, and returned in November 1913. The passenger lists show his occupation still as a painter.

Albert married Ida Emma Hornby in Horsham in the 5th May 1915. They had a daughter, Doris Wilma, who was born on 6th March 1916. Emma later married Thomas Pennington in West Derby, Lancashire.

Albert’s brother Tom who was also with the Royal Fusiliers (City of London Regiment), was killed in action on 13th May 1915.  His brother Eric served with the Hertfordshire and Leicestershire Regiments and survived the war.

1914 September Events from the pages of the Royston Crow

Mr E Snow Fordham put a notice in the Post Office offering every Ashwell recruit 20s (£1) on leaving for the front. One of the first to claim, Mr Albert (Bert) Hyder, left for St George’s Barracks, London to join his old regiment, the West Canadian Rough Riders (Manitoba). He generously donated the money to the Red Cross.